Do you want to know who are the richest men on Earth? Read on to find out who they are and how much they’re worth. Aiming to be one of 2016’s 10 Richest Men In The World will start with one thing: setting it as a goal. If you plan to knock off some of these wealthy men on the top of the list, get to know them and learn how they became so wealthy.

Forbes magazine is the most reliable source of information when it comes to knowing who’s who in the list of top 10 richest men in the world. From business tycoons to the entertainment industry, anyone is eligible to make it to the list as long as they have the wealth to back it up. Of course, the wealth needs to be acquired through legitimate means (sorry, Scarface. You won’t have a spot here). If you’re curious as to who has made it to the list of 2016’s richest men in the world, stick around and we’ll get to tell you who are the wealthiest men right now according to Forbes. Real Time Net Worth As of 8/1/16
$78.3 Billion
2016 Billionaires Net Worth
$75 Billion
In 1975, William Henry “Bill” Gates III founded Microsoft and made the PC software company the most famous and biggest in the world. Gates revolutionized the commercialization of personal computers and pushed it to great heights and to the next generation. He is also known for being a very generous man that spends billions in charity to help improve the standard of living for children around the globe. It’s amazing that the more money he spends to help people, the richer he becomes. Real Time Net Worth As of 8/1/16
$75.3 Billion
2016 Billionaires Net Worth
$67 Billion
Amancio Ortega Gaona is a Spanish business tycoon and the founder of the Inditex company, best known for its company’s flagship, Zara. Ortega has since expanded his empire which now includes Massimo Dutti and Pull & Bear, making him the richest man in Europe and the wealthiest retailer in the world. He is currently the world’s second richest person with a total net worth of US$74.6 billion as of August 2016. Real Time Net Worth As of 8/1/16
$64.7 Billion
2016 Billionaires Net Worth
$60.8 Billion
Warren Edward Buffett is a business tycoon, an investor, and philanthropist from America. He is the chairman and CEO of Berkshire Hathaway which is the fifth most valuable corporation in the United States. In 2008, Buffett was ranked as the wealthiest person in the world, and in 2015 he was the world’s third wealthiest person. Real Time Net Worth As of 8/1/16
$49.9 Billion
2016 Billionaires Net Worth
$50 Billion
Carlos Slim Helú is a businessman and investor from Mexico City, Mexico, and began working as a stockbroker shortly after graduating from college. He quickly earned his fortune of $40 million after buying his own business of stock brokerage from private investments. He continued to build his wealth by purchasing new businesses in Mexico with Telemex as his most lucrative purchase in 1990. He had two great deals of selling his businesses that brought his net worth to $50 billion which made him the richest man in the world until he was surpassed by Bill Gates in 2013. Real Time Net Worth As of 8/1/16
$65.8 Billion
2016 Billionaires Net Worth
$45.2 Billion
Even as a kid, Jeff Bezos already had a brilliant mind getting interested in what other children would usually ignore. While he worked at a brokerage firm on Wallstreet, he discovered that electronic list for wholesalers already existed, so he would just have to create a single place on the internet where consumers could search and order the books they wanted. This what gave him the idea for Amazon, and the rest is history. Real Time Net Worth As of 8/1/16
$53.5 Billion
2016 Billionaires Net Worth
$44.6 Billion
Mark Zuckerberg dropped out in his sophomore year at Harvard to focus and devote himself full-time to Facebook that gained one million users by the end of 2004. Zuckerberg has great control and is very confident about what he can do to Facebook that he rejected a $1 billion offer from Yahoo to purchase his company. He is more interested in building a larger company, thus, Mark Zuckerberg became the 2010 Time Magazine person of the year and Facebook entered the stock market becoming the biggest tech IPO in history. Real Time Net Worth As of 7/31/16
$51.6 Billion
2016 Billionaires Net Worth
$43.6 Billion
Larry Ellison calls this era the “Information Age” among all things. Ellison and some partners were working on creating databases for storing and highly efficient data management systems, and in 1982 named the company Oracle Systems Corporation. His aggressive sales strategy made Oracle one of the top companies in the world. Learning from mistakes is one of Larry Ellison’s key attitude and that made him one of the richest men in the world today. Image via The Atlantic

Real Time Net Worth As of 7/31/16
$48.3 Billion
2016 Billionaires Net Worth
$40 Billion
Born to a middle-class family in Boston, Massachusetts, Michael Bloomberg put himself at school by working as a parking lot attendant. He used to work with the Solomon brothers in Wallstreet but was eventually fired and used his $10 million severance to launch a startup company that efficiently provides vital data to Wallstreet. Bloomberg’s innovative market systems and simplified buying and selling of financial security paved the way for him to become a billionaire. His reputation of being a sharp businessman and politician also allowed him to be repeatedly reelected as Mayor of New York City. 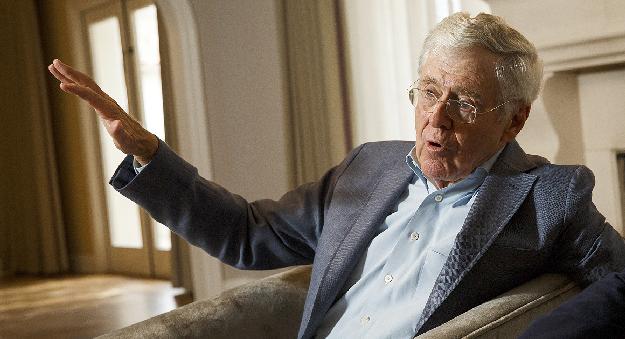 Real Time Net Worth As of 7/31/16
$44.2 Billion
2016 Billionaires Net Worth
$39.6 Billion
Charles de Ganahl Koch is head man of the board and the older sibling of the famous owners of Koch Industries. One of the most politically influential billionaires in the United States, he contributes to the Republican Party and its candidates and some charitable and cultural institutions. As a philanthropist, Koch supports a number of free market-oriented educational organizations and has co-founded the Washington, DC-based Cato Institute. Click here for more details about the world renowned Koch brothers. Real Time Net Worth as of 7/31/16
$44.2 Billion
2016 Billionaires Net Worth
$39.6 Billion
David Hamilton Koch shares control of $115 billion on Koch Industries and the younger brother of Charles Koch. A political activist, he and his brother have donated to Republican political advocacy groups and to Republican political campaigns. David Koch had several charity works and has a theater named after him following a gift of 100 million dollars for its renovation in 2008.

These wealthiest men in the world have massive fortunes and incredible stories on how they’ve earned them. They were ranked and named by Forbes as the World’s Billionaires List for this year 2016. The business magazine found 1,810 living billionaires where Bill Gates remain on the top of the list for three years now. Facebook’s Mark Zuckerberg and Amazon’s Jeff Bezos, however, are new to the top 10. So what do you think? Do you have what it takes to knock off these guys from the list?

HOW-TO: Dress Like the Men of New York City THE MOST EXPENSIVE LUXURY CIGAR IN THE WORLD